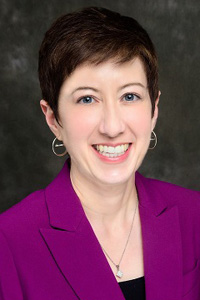 Katie Leonard joined Johnson College in January of 2007 as the College’s Coordinator of Grants and Annual Fund. From there, she had continued success in the areas of fundraising and community outreach which led her to become the Director of Development, Director of Institutional Advancement, and then on to Vice President of Institutional Advancement and Senior Vice President of College Advancement. Over the last ten years, Dr. Leonard’s contributions to the College have been innumerable. In her time with the College, Dr. Leonard formed industry relationships, reestablished the alumni program, increased annual giving, and initiated the College’s rebranding in 2011. She executed the College’s first-ever capital campaign in 2013 which raised, comprehensively, over $5 million to build the new Health Science Technology Center on campus, the largest building project to date. Dr. Leonard was named Johnson College’s 8th President & CEO in January of 2018.

Dr. Leonard holds a Bachelor of Arts degree in English from York College of Pennsylvania, a Master of Arts degree in organizational leadership from Mansfield University, and a doctorate of education from Capella University. Before bringing her talents to Johnson College, Dr. Leonard held multiple positions in York, PA, working with government officials and non-profit organizations. In York, she was the Executive Director of Downtown Inc., York’s Main Street Program. President Leonard has also made great contributions to the community outside of her roles with Johnson College. She serves on the board of directors of NeighborWorks of Northeastern Pennsylvania, The Greater Scranton Chamber of Commerce’s LIFE Board, and is a past board member of the Lackawanna Home Builders Association.

Dr. Leonard resides in Scranton with her husband Bill and daughter Sophie.